I can tell you Paul and Madonna that had i been visiting that museum and stumbled upon that group sex and had been with my kids the cops would have rescued your friends. Same with the young lady inserting a dead chicken into her vagina in an open busy supermarket. Frankly I don't know how they got out of those places in one piece.

As for the "punk prayer" I don't know what you feel about religion but I'll share something with you two geniuses: Going into a Cathedral where people are praying and shouting "shit shit the Lord's shit" is a crime in Russia. Your friends who were caught got off easy. The cops are still looking for the rest of the gang. I hope they get found.

You owe an apology to the people of Russia for your gross interference in their process of apprehending and punishing people who do criminal acts and in interfering in their electoral process.

Sir Paul, perhaps you haven't heard of Julian Assange. He sure could use your voice right about now. And Madonna, the same goes for Army Private Bradley Manning.

And Madonna- why not learn about Private Bradley Manning- he could use your voice right about now. 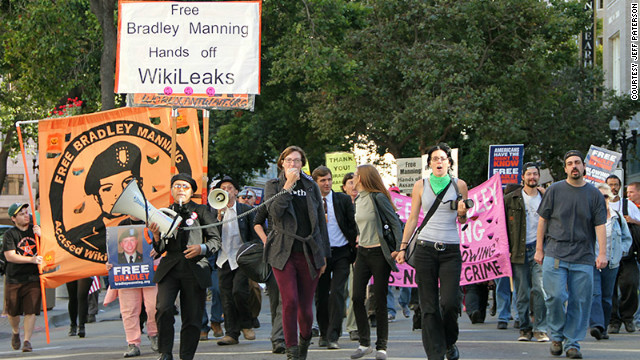 
STORY HIGHLIGHTS
(CNN) -- Julian Assange made headlines Sunday by simply stepping onto an embassy balcony in London. The same day, the young man some say made Assange famous passed his 817th day behind bars.
Army Pfc. Bradley Manning sat thousands of miles away in Kansas at Fort Leavenworth penitentiary. On a sprawling lot of farmland, Leavenworth is a historic place -- once holding Al Capone and George "Machine Gun" Kelly.
Less Capone than Beetle Bailey with his wire-rim glasses, skinny frame and computer savvy, Manning is still a notorious figure. He is suspected of being behind the largest leak of classified war time intelligence and diplomatic correspondence in United States history.
The government believes Manning downloaded hundreds of thousands of documents while he worked as an intelligence analyst near Baghdad during the Iraq war. The government alleges Manning handed the information to WikiLeaks which sparkedtremendous controversy when it began publishing it in late summer 2010.
For the past two years, Assange has been careful to not say whether Manning was or was not the source of the information. It's worth noting that Manning, too, has not said a word on the subject either (though a chat log published by Wired magazine, the government argues, suggests Manning is the source.) 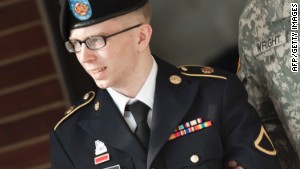 Pfc. Bradley Manning is suspected of leaking hundreds of thousands of classified documents
Manning has not entered a plea.
He is facing 22 charges and scheduled to start his military trial September 21. He's accused of wrongfully causing intelligence to be published on the Internet, knowing that it was accessible to the enemy and multiple counts of theft of public records. The most serious charge -- aiding the enemy -- makes Manning eligible for the death penalty. Prosecutors have said they'll not seek that.
Many legal scholars surmise that the 24-year-old will instead go to prison for the rest of his life.
Manning has been held by the U.S. military since May 2010.
On Sunday, Assange's wording was measured as usual.
"If Bradley Manning really did as he is accused, he is a hero," he said.
In the middle of his own legal drama, Assange continued by saying that Manning is "an example to us all and one of the world's foremost political prisoners."
Michael Thurman, an Air Force vet, watched Assange on the news. The 24-year-old Air Force veteran had just gotten out of jail in Oakland, California, he said.
Thurman was arrested along with five other demonstrators when they refused to leave a pro-Manning rally Thursday at an Obama campaign office in Oakland, California, according to police. The protesters were charged with trespassing.
Thurman and several other military veterans organized the march along with 60 pro-Manning protesters in the Bay area, he told CNN.
A YouTube video shows a throng of protesters outside the office's doors. They played instruments and chanted, "We want freedom for Bradley Manning!" 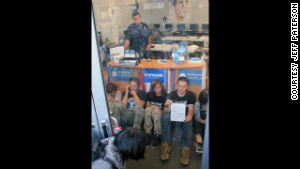 Bradley Manning supporters refused to leave an Obama campaign office in Oakland, California, on Thursday.
Thurman said he and other demonstrators went into the office and demanded workers send a letter demanding Manning's release from prison. The letter, which can be read in full here, also asks that Obama apologize for saying Manning "broke the law" at a fundraiser in 2011. It also asks that "President Obama ensures soldiers are free from illegal pretrial punishment."
The protesters asked workers to fax the letter to the White House, he said.
"We weren't sure what kind of reception we were going to get, but we wanted to make our point," Thurman told CNN. "We were going to make sure that the president heard us that Bradley has been in jail too long, wrongfully at that, and it's time Bradley got justice."
A brief scuffle that broke out between Obama workers and the demonstrators was recorded and posted on YouTube. It's unclear what sparked it.
At some point, demonstrators plopped down side-by-side against a desk. Several TwitPics and photos on Facebook show the scene, including of the protesters holding up a sign that read, "Don't talk to the cops."
More photos of the protest were posted online, including one that showed a demonstrator holding a large cloth sign that read "Outing the truth is not a crime! Free Bradley Manning." Another man held a cardboard sign with the question, "Obama, why are you prosecuting whistleblowers?"
Thurman told CNN that the pro-Manning movement is gaining momentum. "We think it's outrageous that he's been in jail for more than 800 days," he said.
Since its founding in 2010, the nonprofit Bradley Manning Support Network, based in northern California, has organized rallies across the country for Manning. The group has a strong social media presence on Twitter found at #vets4brad, #bradlymanning and#freebrad. Manning's public Facebook page is usually active.
The network has raised money to pay for Manning's private attorney and experienced court martial counsel David Coombs. The lawyer has kept a blog for more than a year detailing developments in Manning's case, often posting full documents online.
Coombs has filed numerous motions over the past year including asking that charges against Manning be dropped or combined -- motions that have taken time to be addressed by the prosecution and heard at Fort Meade, Maryland, where all pre-trial proceedings have occurred. Coombs has often struck out. Several motions were denied in April. 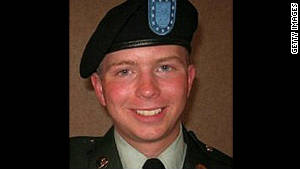 An official military photo of Bradley Manning who is facing 22 charges including aiding the enemy.
Just last week, Coombs filed another motionalleging that Manning had been held in the "harshest conditions possible" which constituted "unlawful pretrial punishment." That will no doubt take weeks to be heard.
"That's what is taking so long, and dragging this case out," said Michael Waddington, a criminal defense attorney who has tried at least 150 military hearings and dozens of court martial trials.
Waddington is not involved in Manning's case.
"The defense has tremendous control over whether Manning gets a speedy trial -- or at least a trial that happens before a client spends 800 or more days in jail," he said. "I have never heard of a case lasting 800 days. That doesn't happen."
Most court martial cases -- from date of charges filed to actual trial -- take between 60 to 180 days, he said.
"I wonder if the pro-Manning protesters and the politics of Manning's case are calling the shots here," Waddington said. "Is this about a man or is this about a cause?"
Thurman says it's both. So does protester Lorraine Reitman. She works for the Electronic Frontier Foundation, a donor-funded nonprofit that works to protect freedom on the Web. She was at Thursday's protest, though not in her capacity with the organization.
"I was protesting on my own because Bradley represents something I believe very strongly in. We want his lawyer to make as many attempts to free Bradley as possible," she said. "It's really about not letting the government dictate or frighten people into not doing and saying as they please or limiting information online."
Pro-Manning supporters are amping up their movement ahead of the November election.
On September 6, the final day of the National Democratic Convention, they are planning to rally at Obama campaign headquarters across the country.
"We have supporters in every major city who are participating," Thurman said. "I know we'll have a strong turn out. Bradley should never think that people have forgotten about him."